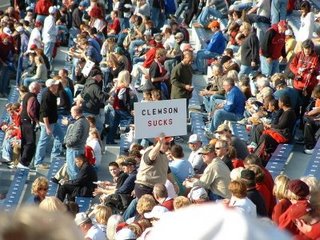 Tech travels to Clemson, South Carolina this weekend to face one of my least favorite sports personalities of all time: Jack Leggett. Every Clemson game is about 30 minutes longer than it should be because Jack loves to put on a show for his purple/orange minions. I think it's BS and can't stand watching Clemson games just because of him.

Concerning the game itself, Clemson comes into the game with a little momentum after kicking the crap out of archrival USC Wednesday night to the tune of 12-2. Clemson is second in the Atlantic with a record of 28-14 (12-9). Offensively, Clemson is a middling team with a sub .300 batting average and only 42 homers on the season (compared to Tech's .324 average and 68 homers in 5 less games played). Defensively however, Clemson is boasting the conference's second best ERA with a 3.65 (compared to Tech's 4.57). Clemson's man to watch for this weekend is Ben Paulsen who is tied for second in the ACC with 64 hits.

Tech needs two of three from Clemson to solidify the lead over the Coastal Division. It'll be tough but I think my sheer dislike of Jack Leggett will give Tech at least one walk-off homer top of the ninth game winning run against the Tigers.

Anyone making the trip to Clemson this weekend?