I like to look at numbers to draw conclusions. I was thinking about the term "sophomore slump" and wanted to pull some coaches' stats out for predictions of CPJ's second year. So here's the most recent 2-year tenured coaches' freshman/sophomore records at all 12 ACC gigs: 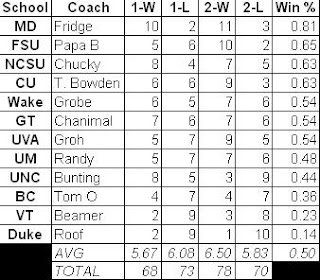 It's nice to know that on average most coaches got better in their second years. That makes sense. In fact, only four of twelve coaches didn't improve in their sophomores seasons: Roof, Amato, Gailey, and Bunting. Amato needed P. Rivers, Bunting was terrible, Roof was at Duke, and Gailey was Gailey. Otherwise, I think the numbers are pretty interesting. It would be totally cool if CPJ followed the trend and won 0.83 more games next year and lost 0.25 less games. That's a +1.08 net. I'll take a 10 win season any day.