Spring practice doesn't start until after Spring Break but conditioning for the Yellow Jackets has begun, the same conditioning that laid the foundation for us being one of the least tired units in the 4th quarter. All information and photos is thanks to Ken Sugiura. 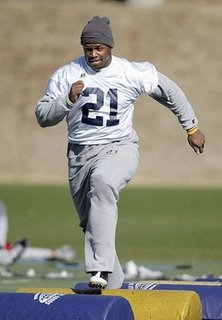 
So, here are two of the more difficult drills. You can read them all at the original link above. How would you fare and when would you pass out? Oh yeah, you are also getting yelled at by Paul Johnson.

Four towels are placed in a square about five yards apart. The players start at one square, place their hand on the towel and, with all their weight on one hand, circle the towel, get up, sprint to the next and do likewise at each corner of the square.

Austin Barrick says: "By far the hardest, especially for [offensive] linemen. You’re supporting your body weight with one arm and you’ve got to bend down and a couple of us have got some bellies. We’ve got to bend over that and spin around. Your legs burn, your back gets tired from bending over. It’s really tiring."

Thanks for the report Ken.

The season has been rough. The season has been long and pretty much unbearable. However, tomorrow is Senior Night. Come to the AMC to show your appreciation. Also, the ACC Tournament starts next week. Plan on us playing the 5/12 game next Thursday at 2pm.

The multitude of polls have been released, and Tech is scattered among the rankings. Baseball America has the Jackets at #18. While the NCBWA has us ranked at #10

Beesball kicks off the ACC season this weekend as they host lowly Maryland. The Terps currently own the worst record in the conference at 4-4. The UM student newspaper delves deeper into the woes of Maryland baseball.