Stories of the Ramblin' Reck

Share All sharing options for: Stories of the Ramblin' Reck

In an effort to spread the history of the Ramblin' Reck here are two short stories (ok, well blurbs) from Ken Box who was the 1975 and 1976 Ramblin' Reck Driver. The first involves the Ramblin' Reck and the Notre Dame Leprechaun in Atlanta in 1976 and the second story is one of my favorites and includes some mutt-lovers in the cesspool. Hope you all enjoy them. 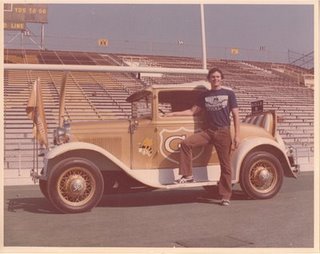 "When we played ND (and won in 1976) the ND Leprechaun wanted a picture standing on the running board of the Reck. As the picture snapped I opened the door and knocked him off pretending I didn't know he was standing there. Then I told him for his safety he shouldn't get close to the Reck while the student body was watching."

Georgia
"The 1977 Reck driver , Tom Smith, was a good friend of mine. He rode shotgun with me on out of town trips and he was a good 'engine head' so his engine repairs skills always came in handy. After the 1976 UGA game in Athens our police escort disappeared. The Reck was running very rough...misfiring a lot. I didn't think we would make it to the U-haul truck and get back to Atlanta. We were in an empty parking lot adjacent to Sanford stadium trying to tune up the engine. A car drove up with a bunch of drunk Dawgs. Two of the rednecks jumped out of the car and said they were going to take the Yellow Jacket spare tire cover. Tom Smith jumped out of his Blazer with a 9mm pistol aimed at their loud mouthed leader and said, 'Go ahead, make my day!' Needless to say, they left in a hurry!"

Can I get a HELL YEAH on that last story?