Remembering the shot heard 'round ATL

Share All sharing options for: Remembering the shot heard 'round ATL 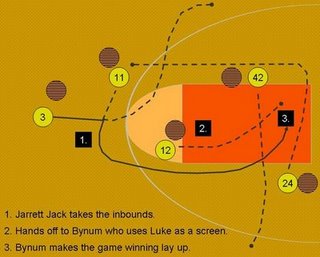 How can anyone forget the shot Will Bynum made to send Tech to the National Championship in 2004? Every time I reflect on the play, I tell people it's one of two times I high-fived my dad. The other time was the 1992 NLCS when Sid Bream slid home and was SAFE. One of my buddies from Pittsburgh has a shirt that says, "Pittsburgh Pirates: Rebuilding Since 1992."

The game was on April 3, 2004. The shot was made off a pick and roll with 1.5 seconds remaining against a favored Oklahoma State team giving Tech a 67-65 win. Every bit of the play is still stuck in my head. Great times.

Anyone like to reflect on past Tech moments, go ahead.