My yesterday was better than your yesterday

Share All sharing options for: My yesterday was better than your yesterday

Things I did yesterday:

Dropped a class, thus avoiding the test that I would have had to take last night (long story, and no, I'm not lazy).

Met the new President Peterson, who shook my hand twice, and actually remembered my name on his way out. The Reck (escorted in part by me) met him as he entered the Student Center. From what I understand, even DRad and Coach Paul Johnson had to wait in line just like everyone else later on. I didn't. Oh yeah.

Rode around campus in the Reck, as our new driver took it offroad and squeezed it through to normally non-traffic areas.

Ate a chicken tender basket at Junior's, but only because I am a very bad Catholic.

Got a picture with Tommy and the Reck. 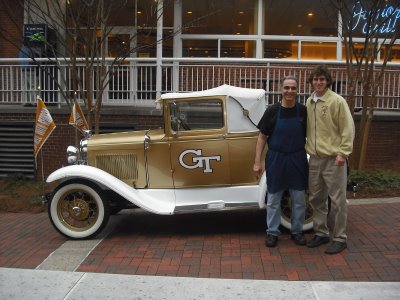 
In other news, GT Men's Rugby dropped a game to Georgia Southern last weekend 17-6, and play Emory tonight (sorry, Winfield told me it was last night, and we all know what happens when you listen to Winfield). Outcome will be updated later, after I make a few calls or one of the players updates the GT Men's Rugby homepage.