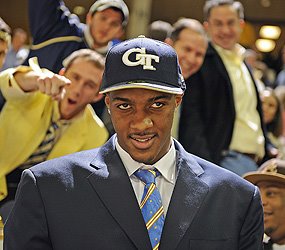 Yesterday evening, right before the Duke tip-off, the gem of Paul Hewitt's recruiting history committed to play basketball at Georgia Tech. The addition of Derrick Favors to an already pretty solid recruiting class simply raises the potential of next year and increases the imagination of the Georgia Tech fan of the success we could have. Imagine the possibilities!

If potential were a penny, we'd be millionaires at Georgia Tech. Hopefully, this will restore faith back into Georgia Tech basketball and Paul Hewitt. God knows, Hewitt needs as much support as he can get. Favors will likely only be here for a year, but he has a chance to give a now mediocre program a glimpse of its past and what its future could be. Another positive that comes from this...the Favors committment can keep Iman Schumpert and Gani Lawal from getting frustrated and leaving early for the NBA. The combination of those 3 on the court can be mind-boggling. And those thoughts and hopes are worth enough for now.

Check out ACCSports, as they discuss the Favors commitment with a few other recruiting gurus and such.

Here's a quick profile/interview with Derrick Favors along with some highlights:

And finally, I give you this video of some disgusting Derrick Favors highlights where he put up 42 points, 20 rebound, and 12 blocked shots. Enjoy!


Derrick Favors commitment to Tech numbed the bad taste of losing to Duke like we did last night. Some thoughts on that game later today. In the meantime, what do you think will happen to Georgia Tech basketball now with Favors coming? How does this affect your opinion on Paul Hewitt?