How do you win the ACC?

Share All sharing options for: How do you win the ACC?

Note: We have a new writer who has joined us. His name is Bird.

As my first post, I would like to drop some statistical analysis on how to win the ACC. This is based entirely on data provided by the post-expansion ACC (2004 forward, all BC data in 2004 is excluded).

Below are some basic graphs showing Scoring Offense vs. Wins and Scoring Defense vs. Wins. You can use the linear regressions to predict your wins/losses for the remainder of the season (e.g. GT should win 6-7 games total for the season based on their offensive output but 8-9 based on their defense). I included this seasons wins/losses by normalizing them across a 13 game season for every team in the ACC that should make a bowl and 12 game season for those that wouldn't. 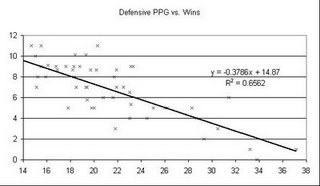 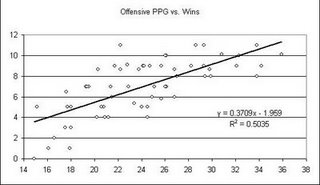 Currently, GT is the #1 defense but I do not see that lasting through the Miami/uga games while UNC is a close second and I see their defensive stats improving against the Terps, mighty Dookies, and hapless Wolfpack. Look for FSU to take the other division. Predicting the winner is a little more difficult because there are less points to interpret and because the statistically disadvantaged team has won twice (FSU in '05 and Wake in '06).

If I were betting man though, I'd put money on the team with the better turnover ratio and in this case it's UNC at +1.44 per game. However, the last time FSU won the ACC, they came into the ACCC with a negative turnover ratio. Look for UNC in the Orange Bowl unless UNC manages to Marcus-Vick-it-up in the ACCC.