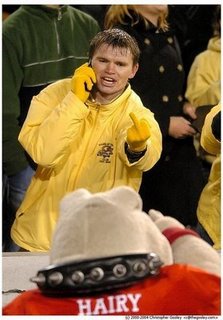 The University [sic] of Georgia is the scum of the earth. They are trash and they aren’t worth a damn thing to this world.


So here’s a list:
10 Reasons why UGAg sucks so bad

10. They think their degree is worth something. Seriously, move out of the state and see what your "degree" does for you.


9. They think they are an above average football team. C’mon please, you got blown out by Bama and Florida. They are the only 2 good teams you played in your conference. You struggled against Vanderbilt who got beat by Duke. You also got taken to the wire by Auburn who absolutely blows! Put together one complete game and then maybe we’ll talk.


8. Because St. Mark Richt is actually a giant douchebag. Sure, the man goes out on mission trips preaching to the natives of the South American jungle. All the while his players are out getting in fights beating their fellow students/administrators to a pulp. Bowden much?


7. Because that bark is the most retarded thing I’ve ever heard. I already know you’re an uneducated piece of trash. Do you really need to confirm my thoughts?


6. They won’t acknowledge our victories (1943,1944) over them during World War II because they claim all their players were fighting the war. But they’ll claim that MNC during the same time period (1942). Also note that GT's sensational Clint Castleberry was in the war... but instead of pissing and moaning about losing games, we simply venerate our student soldier.


5. Because there’s not a thing special about UGAg. "Between the Hedges?" pssh, the entire SEC has hedges. The damn mutt of a dog was copied off Yale University and the Georgie "G"? Taken from the Green Bay Packers.


3. Their short list of 'traditions' - a chant that talks about why they are the worst fans in college football, a parade of players in front of the shallow end of the gene pool, and the greatest college football tradition of all time - spelling. Here's some spelling: D-U-M-B-A-S-S.


2. Because they like to hoot and holler about the current streak, but they forget the Tech still owns the streak record. In fact, Georgia flipped such a shit about finally beating us in 1957 that they put a no-name fullback in their hall of fame for scoring the only touchdown in that 7-0 victory.