Share All sharing options for: ACC Roundtable #3: The Wrap-Up

This 3rd week of the ACC Roundtable was generously brought to you by us, The Legacyx4. The most important questions revolved around where the conference stands in the long run when compared to the rest of the BCS conferences. Below are this week's participating blogs and links to their discussion:
Boston College: BC Interruption
Virginia Tech: College Gameballs
Virginia Tech: Gobbler Country
Clemson: Block-C
Virginia: From Old Virginia
Georgia Tech: The Legacyx4
North Carolina: Tar Heel Mania

Here's a recap of the questions:

1. There is no question as to whether the ACC is one of the toughest conferences this year as far as its constituents are concerned. Currently, 4 teams are bowl eligible while 5 are within one game of reaching eligibility. Is it mediocrity, or is the ACC on its way to being the powerhouse that expansion was supposed to bring?

2. With a few notable exceptions, quarterback play in the ACC has been poor across the past couple of seasons, contributing at least in some part to the lack of offensive potency in the conference. Where does the ACC stand today in terms of quarterback play, and do you think our offenses are improving?

3. There are 5 out-of-conference games left for the ACC - BC/Notre Dame, Wake Forest/Vandy, Clemson/USC, GT/Georgia, and FSU/Florida. We went 3-2 in those games last year, and then 2-5 in bowl play (with the only wins coming over Michigan State and UConn). How do you feel we as a conference will compete against the rest of the NCAA in the final weeks of the season, and are you confident in our bowl play?

4. As far as Tech fans are concernced, ACC officiating is absolutely atrocious, both in conference (helmet-to-helmet, lack of holding calls) and out of conference. Are you in agreement? List any specific, obvious grievances, or use this opportunity to verbally assault ACC refs.

5. Every college football fan has a favorite player not on their team. Who is that player for you in the ACC?


To avoid redundancy, we're going to lump questions 1 and 2 together. The blogs emphasize the potential of the conference. The league is young and we have clearly not arrived at the "national powerhouse" level we all hope to see the ACC become. In the words of BC Interruption, the quarterbacks "are turrible," but the most common factor and reason for this "turribleness" is the majority of inexperienced quarterbacks. Best case scenario says that the ACC in 2-3 years becomes what the Big 12 is today (as compared to the worst case, where we continue to be the ACC). Another common view brought on by the Roundtable is how we stack up to the rest of the BCS conferences. The consensus is not good. Many of us put the conference ahead of the Big East as it still struggles to prove prove that it deserves anything. When we all look at bowl projections, the possible Orange Bowl matchups are nightmares. The majority of blogs do not like the matchups. Though the ACC is tougher and better than it's been, we all agree that the "Elite of the ACC" does not match up well with the "Elite of the rest." It is the mid-tier bowls where we can hopfully show our improvement this year.

Remaining out-of-conference games:
The most common game that the bloggers picked is Wake Forest beating Vanderbilt. Though Dane does continue the tradition of The Legacy Crew being bold in our picks and admits that it would be "no surprise to see us going 4-1" in that week with the exception being Florida State losing to Florida. Yes, Dane does have a major boner crush on the Gators and Urban Meyer (says the guy who has a blow up doll with "THE LEACH" written across the chest in magic marker - Dane). Boston College seemed to have the second most enthusiastic crowd as it was picked to win its final OOC game against Notre Dame in the Catholic Bowl this weekend. After that, it's all a belief that the teams can "play it closer than in the past." The improvement is clear, we just aren't where we need to be quite yet. In summary, the ACC Roundtable sees more competitive games this year but still no better outcomes.

Officials Vent:
The ACC Roundtable seems to be made up of old men who are too complacent and passive. The Legacy Crew is proud to be the ones who put a little fire,yelling, and pissed off drunk attitude into the discussion! Yes, bad officiating happens everywhere, we'll admit it. However! When given the chance we will gladly rip the officials a new one and curse their mother's grave and the whistles that they blow! Assholes! College Gameballs, BC Interruption, and Gobbler Country all reply with a resounding *yawn* "bad officiating happens." *yawwwwn* From Old Virginia admits there is a problem and seems mildly annoyed with the issue.

Hey Block-C : we get the gist. Holding happens. Sometimes it doesn't get called, but we feel that violations like a prevented sack and safety should probably get a flag. However, photo evidence shows how much Clemson fans appreciate when refs don't call out people when they are holding somethin' ridiculous: 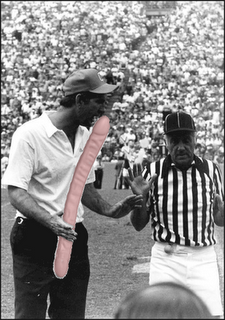 Favorite Players:
There are players who people can just enjoy to watch no matter what team they play on. We asked fellow members of the Roundtable who their favorite player was that they enjoyed to watch. Georgia Tech and North Carolina lead the way with exciting players in (former) GT WR Calvin Johnson and B-Back Jon Dwyer. BC Interruption needed a gun put to their heads to finally admit that Hakeem Nicks of UNC sparks their interest. Block-C surprisingly looks to a Florida State defensive player as a role model in Myron Rolle.


Look for Roundtable #4 to come around sometime next week.