Share All sharing options for: Know Your College Football Badasses: Will Muschamp

Ever since playing soccer for Coach Ruzic my freshman year of high school, I have not been able to get enough of coaches that at times seem batshit crazy. You know, one of those people who, if they carried their demeanor into any other setting, would be immediately labeled as an asshole boss/abusive father/average schoolbus driver/psychopath. Coach Ruzic had tendency to critique deadlift or squat techniques with the normal direction of your rectum, using a very tight "OK" sign as illustration ("Your butthole should be able to sit flat against the wall, Kalejta!"). Those who dwell on the wrong side of the socially acceptable line are probably the single greatest source of jollity in my life.

Will Muschamp was a DB for the University of Georgia - however, I consider him one of the "righteous ones," like Alton Brown of Good Eats. His pedigree also includes coaching linebackers and later acting as defensive coordinator for Nick Saban's LSU squad, who ranked first in the nation in scoring defense and total defense. Yadda yadda Dolphins later, Muschamp found himself at Auburn, where I decided that he is one of my favorite characters in the college football world, mainly because of this:

During the Great Georiga Tech Coaching Search of 2008, Muschamp's name was thrown around (he was actually renamed to simply BMFY!) by many Tech fans, reactionary against the previous, mostly sedated coaching staff.

While he did not get the head coaching job at Tech, he left Auburn to take the job at Texas, whose defense was, well, kinda shitty in the 2007 season. Muschamps Longhorns defense has not allowed more than 14 points in any game - with the average margin of victory for the Horns being 35.8 points, Muschamp has kept everything nice and comfortable. These results are mainly due to the fact that he not afraid to make an example out of himself in order to make a statement. 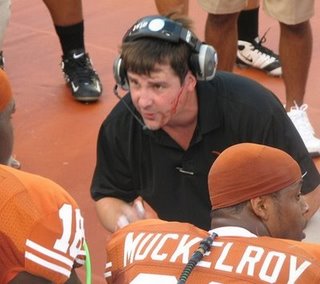 Delving into the mind of the player he is talking to, one can only guess the reaction is along the lines of, "Man, this is some ol' bullshit... that mother****er is bleeding! We need to fumble, now. I have to get the **** out of here.

That's right, that's blood. And while that cut could probably happen to anybody, the probable displays of crazy just seem expected out of ol' WM. Word on the street is that Clemson is looking to pick up BMFY!, and insider information is that he plans to take a bite out of Howard's Rock, just to show everyone how serious he is.

Today, drink to Will Muschamp, a true college football badass.