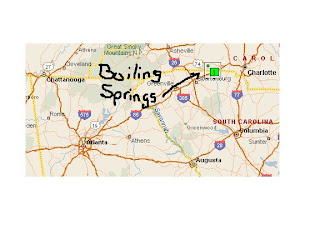 That's where Boiling Springs, NC is. The middle of nowhere. My brother went there for a swimming recruiting visit. He said they have one stoplight. Here's a "preview".

Will The Legacy crew be there? Unlike WREK Radio, Hellz Yeah!

This weekends game involves fine tuning. And a hopeful time to get some backups and reserves playing time. We all know the history of how Army wimped out and embarrassed themselves so we won't dwell on it. On to the what-ifs!

Gardner-Webb wins if: Everyone at Georgia Tech gets sick or the apocalypse happens and everyone dies. The bulldogs have not seen the triple option, and they are not one of the premier teams in FCS let alone the Big South. Watch for Stan Doolittle who has thrown for over 1,000 yards and their rushing attack of Phillip Peoples and Patrick Hall. Peoples and Hall have combined for 7 of G-W's 13 touchdowns. Their rush defense is good. Currently they allow 45.6 yards per game and that puts them 3rd nationally in 1-AA.

Georgia Tech wins if: Are we going there? Yes we are. We win if we just show up. I have no doubt that Paul Johnson is building up Gardner-Webb and having out players prepared. Don't expect too many starters to stay in for more than a half, Calvin Booker may even start. Be ready to see the future of our program get a good amount of reps and tuning in the 2nd half. Yes, we have even younger players waiting in the wings.

Sidenotes: Brian Bohanon was an assistant at Gardner-Webb in 1996.