Well it's Clemson Week, let's watch something that makes us all smile


So we all know about the turmoil that's gone on in Clemson: Tommy Bowden is fired, interim coach fires the OC, and Cullen Harper says things he shouldn't be saying in public. What chaos! What a disaster for tiger fans! At the beginning of the year, I said that we were going to lose to Clemson and probably lose to Clemson big. Now, I am not as worried. More confident of a win honestly. On to the what-if's!

Clemson wins if: The 3-point stance makes that much of a difference, Dabo Swinney pulls wild cards out of his ass, and the team bands together to try to salvage the 2nd half of the season. Clemson may still hold the athletic advantage over the Jackets but do they hold the team advantage? The answer is uncertain. What about Willy Korn? The running combo of him and James Davis (AKA Thunder) will have to be enough. In regards to passing, if there is a passing game, Block-C is praying for Aaron Kelly to come through.

Georgia Tech wins if: They take advantage of the Clemson turmoil. No way Monday was a productive practice day. That gives them only 4 days to practice and prepare for Georgia Tech. Josh Nesbitt is back. Jonathon Dwyer is chompin' at the bit to prove that he is for real and that Gardner-Webb was a fluke. Tech wins if the D-Line stops James Davis (no C.J. Spiller!) from the running game. Willy Korn flakes ouuuuuuuuuuuuuuut. I have very little doubt that we come out unprepared for this game. Lord knows how much Paul Johnson beat our team into the ground this weak, mentally and physically.
Sidenotes: George O'Leary was in Dabo Swinney's shoes back in 1994. O'Leary took over the Jackets in mid-season 1994 after B*** L**** was fired. His first game he coached was against Clemson. The Jackets lost 20-10.

My ridiculous amount of optimism continues and the Jackets take advantage of the mess and our defense carries the team...again. After Korn and Davis are stopped, no one knows what to do. Georgia Tech 24 Clemson 10. 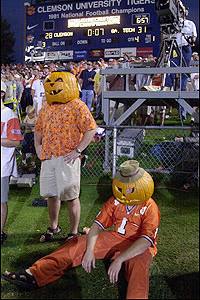